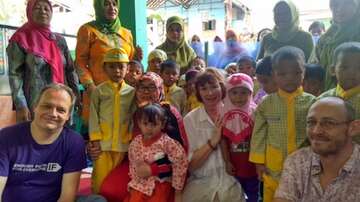 Last week, a group of Save the Children volunteers flew out to Indonesia to see first-hand how our Families First Signature Programme is transforming children’s lives.

East Anglia volunteer David Float has been blogging daily on the experience.

Yesterday we ventured from the big cities and out into the field (in more ways than one).

Our first stop was at the Cianjur district social office to meet the staff working with a wide range of social issues, including child protection.

PDAK opened an office last year in this small regional town, after initial efforts in the cities of Jakarta and Bandung. We collected Dudy, the district Child Protection Officer, who accompanied us into the smaller rural communities we visited next.

The first was the village of Kelurahan Sayang, where a very formal although warm and welcoming meeting was arranged by the head of the village and its neighbour, Desa Sukamaju.

The meeting comprised the local Community Forum, which was implementing the child protection programme, and many health workers who handle individual cases. The programme was only established in December last year, and so the numbers involved and the enthusiasm with which we were greeted was very encouraging.

Their primary challenge is the ‘socialisation’ (wide community acceptance) of the programmes principles at community level. These communities were relatively large, Kelurahan Sayang has around 37,000 in its extended area, and these principles are the prevention of child protection issues: a fourfold strategy to prevent abuse, exploitation, neglect, and to support at-risk families.

Beyond this, the community is stepping up to handling individual cases, and also to encourage and empower wealthier community members to help their poorer neighbours as a moral responsibility.

Although there are an impressive 120 plus volunteer health workers helping to carry out the work in the community, they are struggling with a lack of resource and adequate support from the government (where Save the Children’s advocacy is crucial).

We then moved on to the much smaller community of Desa Cibinong (around 8,000 inhabitants) who were gathered with their neighbours from Desa Ciharashas.

Here we saw a greater struggle with the socialisation of the child protection principles because, although in more populous areas there was much enthusiasm, many areas are far more spread out and remote.

We also met local people who were directly involved in community projects, such as the businessman who had set up training for poor older children to ready them for work, and a teacher who had established an ‘informal school’ after his own working hours so that the poor children had access to lessons.

Although there was less of an issue with access to schools than we might have otherwise expected (both villages had a good number of schools for all ages) there were very pointed reminders of the levels of poverty faced in this area and the impact upon children.

This is one of the biggest catchment areas in Indonesia for migrant workers being drawn abroad. Most commonly the mother is taken up in low-paid domestic service, meaning the children are placed with elderly, often poor and incapable grandparents.

After spending yesterday with some of the rural communities that Save the Children helps, today we visited an urban area just outside Bandung where we met members of Porsapa, the community forum for the area of Jaya Mekar. The committee was founded by Save the Children in 2014.

The community decided to start the forum as a result of a tragic incident. After a family feud a father set fire to himself and his son. The child died and the father was sent to prison.

The feeling amongst the community was that such a tragedy must never happen again. They determined to do something about the social problems facing people in their area.

The main issues the forum is trying to tackle are child exploitation (child labour), child neglect, (due to parents going to work) and early marriage (for example girls being married as young as 14 years old.)

They have also been working with Save the Children to intervene when children drop out of school and are addressing other issues such the empowerment of women and family planning.

Nurseries set up with help of your donations

We visited a kindergarten – one of 13 in the local area set up with the help of Save the Children, who have been training the teachers needed to run them. There were 20 children aged 4-6 at the kindergarten, which was set up in 2010.

The children were unbelievably cute and sang to us in their outdoor classroom – the only classroom they currently have – which has a canopy but no walls.

They need a proper indoor classroom and the government could provide one – but only if the community can supply all the data required, including birth certificates, which we have already learned is a problem in poorer communities. Save the Children has pledged to help in sorting this out.