India: “Nothing about us, without us” 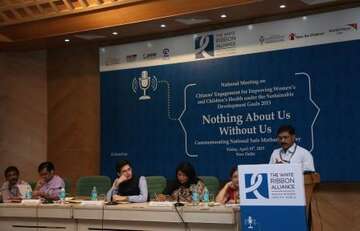 “I realised how much more I can do, and the power I have to influence change for people. Today I dream with my eyes open. Change is possible.”

Meera Devi, a representative from Muzaffar district in Bihar, is talking about the impact a women’s leadership programme has had on her.

Through the programme, Meera  learned about rights and entitlements, and she is now an active advocate on issues ranging from education to women’s empowerment.

Geeta Regar, from Rajamand in Rajasthan, who took a similar programme to Meera’s, is another inspiring catalyst for change.

During her tenure as village head, Geeta noticed that participation of communities, particularly women, was minimal, and worked to engage women in local affairs.

One of the first things Geeta did was to ensure a functioning primary health centre, with a delivery room where women could give birth safely. Previously, women gave birth at home or had to travel a long way to a clinic.

“When I heard the baby cry at the first birth in that room, my happiness was unparalleled. It became my mission that every woman will have a safe delivery and every child will have a healthy start.”

Meera and Geeta were both speaking at a Citizens’ Hearing in Delhi, convened to discuss the new development framework that will replace the Millennium Development Goals, and in particular women’s and children’s health.

Every year, as many as 44,000 Indian women die needlessly during pregnancy and childbirth. Official estimates are that 167 mothers die per 100,000 live births

The replacement of the Millennium Development Goals with new Sustainable Development Goals this year offers an opportunity to approach development differently – and in particular to engage citizens more meaningfully than before in setting and realising the goals.

Out from behind closed doors

More than ever before, discussions are being taken out from behind closed doors to involve the people.

The Citizen’s Hearing is one such significant step in enabling people to inform the global and national development agenda.

Raghav Chadda, spokesperson for the Aam Admi Party (AAP), said that his Party’s vision is to change India from a parliamentary democracy to a participatory democracy. He said the AAP government is creating accountability structures, and working to engage citizens through participatory budgeting, neighbourhood meetings and the newly-developed Delhi Dialogue Council.

Another speaker, Dr Rakesh Kumar, Joint Secretary at the Ministry of Health and Family Welfare, spoke of the drive to stop children in India dying from preventable causes, and stressed the need to learn lessons from the polio eradication campaign.

“The most important [lesson] was people’s participation, people’s engagement. That was the key to mitigate challenges on ground,” he stressed.

“Citizens’ engagement is critical for generating demand from the communities. Just the availability of services is not enough. People need to be more responsive and demanding so that no mothers die in India. We need to empower citizens to demand fulfillment of entitlements and quality health services.”

For citizen engagement to truly work, mechanisms need to be created for people’s voices to be heard and acknowledged.

There is a growing need to create space that recognizes the citizen’s voice, and to empower people to make better sense of efforts that will impact their lives.