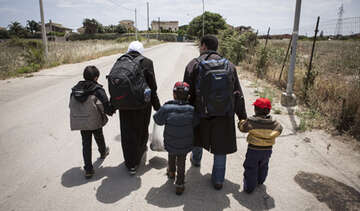 Some 250 children have arrived in Italy over the past week, as part of the growing flow of migrants crossing the Mediterranean Sea.

Since the start of the year, more than 700 children have made the dangerous boat journey to Europe, around 200 of them unaccompanied minors.

The number of migrants arriving on Italy’s shores is up 60 per cent year-on-year from January 2014.

Currently there are also more than 700 unaccompanied children still living in overcrowded initial reception centres in Italy, while they wait to be placed in local communities.

Valerio Neri, Director of Save the Children Italy, says: “Italy is not prepared to deal with this massive surge of arrivals.

“It is critical that a national system of adequate reception and protection for unaccompanied migrant children is put in place, one that ends the current practice where children spend months waiting in centres where they are at risk of violence, trafficking and exploitation.”

“The deteriorating situation in Libya has led to a surge in the number of migrants departing for Europe. Libya has for many years been the point of departure for thousands of people fleeing poverty and conflict in western and sub-Saharan Africa and conflict in Syria.

“Despite efforts by the Italian coast guard, last week more than 300 migrants died at sea, among them children.

Valerio Neri added: “It is essential that the rescue at sea of migrants is a priority for Italy and for Europe.

“The efforts of the international community to address the crisis in Libya does not take away the necessary attention and resources for saving the lives of migrant children, who are vulnerable and who continue to risk their lives by attempting the treacherous crossing.

“We’re calling on the European Union to strengthen its capacity for search and rescue missions.”