Ebola: When survival is just the first step

Around a year ago I arrived in Sierra Leone for the first time. The Ebola epidemic seemed to be spiralling out of control, deadly and poorly understood. A few weeks later the outbreak reached its peak, with more than 500 cases recorded in a single week.

Sometimes I felt like I was looking at the country through a glass screen. It was right there but distant. Movement was restricted, crowds were avoided, everyone was cautious.

Today the situation is different. The governments of the affected counties, NGOs and, most crucially, Ebola-stricken communities have worked together in a concerted effort to fight the disease.

We’ve come a long way, but we aren’t there yet. A few days ago Ebola claimed another life in Sierra Leone, just as hope was growing that we’d seen the last case there. The fight to get to zero goes on.

But alongside that we face the equally urgent task of helping children affected by the disease to rebuild their lives. Schools were closed for six months. Businesses and livelihoods suffered. Thousands of children in Sierra Leone lost parents and loved ones.

I met Joshua* and his cousin Ibrahim* about 10 minutes’ drive from the site of the Save the Children-managed Ebola Treatment Centre in Kerry Town, which closed in April as the number of cases dropped.

Both are 14 years old. Both are Ebola survivors. But survival was just the start of their struggle to recover.

Ibrahim lives nearby with his grandmother but they tell me he’s more or less always here at Joshua’s house.

“I came to stay with my uncle and aunt as my mother and father passed away when I was a very small boy,” he tells me.

Ibrahim’s uncle Abu* supported the entire family by working to build latrines. “After school we would go to the site and help him fetch water, and get him ‘kola nuts’ to chew. I liked helping him,” Ibrahim continues.

Abu was the first person in the family to get Ebola. “When my uncle was sick two of us children cared for him – myself and Joshua. We tried our best but he couldn’t recover. After he passed away we were also infected.”

By the time Joshua and Ibrahim managed to pull through with the help of the team at the treatment centre, Ebola had coursed through their family and taken the lives of Abu and 12 other relatives, including Joshua’s younger brother.

“When my brother died I felt bad. I could not speak,” he remembers.

Joshua was given the all clear and returned home, but his own fight for life wasn’t over yet. Due to complications he remained very ill, slipping in and out of consciousness.

Ibrahim says, “It was difficult when I saw Joshua again and he was in an ambulance on a stretcher. I thought that was the end of his life. I was totally discouraged after we had the same struggle.” 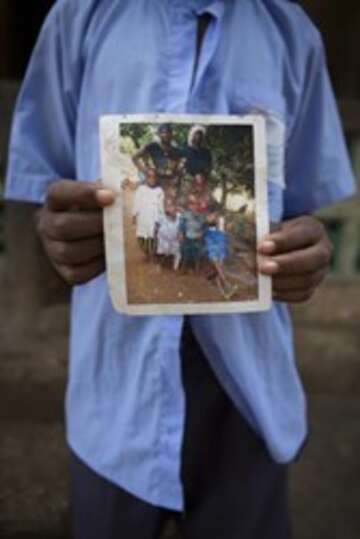 Joshua shows me a photo (right). In it he sits on a chair, visibly thin and weak, surrounded by his remaining family. “I stayed in my room when I couldn’t walk for one month. I was very sick. This is the day I left. On that day, that was the first time I thought I would make it,” he says.

With the support of his mother, Ibrahim and Save the Children, Joshua has slowly returned to something approaching his full strength.

Our team provided a package of support including rice, oil, a mattress and money to help him get the medical treatment he needed. Our child protection team visit regularly to provide psychosocial support.

Living with their loss wasn’t the only obstacle on their path though. Even returning to school was to prove a challenge.

When the family was hit by Ebola, the majority of their possessions were taken away and burnt in an attempt to stop further transmission, leaving them with almost nothing to return to.

When they returned to school, they were forced to start from scratch, with Abu no longer alive to support them.

The lack of simple but vital things like books and pens could have crushed their dreams of returning to education and making up for lost time.

Joshua tells me, “We had financial challenges. I wanted to go. I could see my colleagues going. I knew they were all going to sit together and take exams. I was very keen to go back to school. I missed my friends.”

Save the Children helped provide school bags, pens, books, radios and money for lunch, and both Joshua and Ibrahim have been able to restart their education.

“I want to be a doctor,” Joshua says. “If I become the doctor I’ll be giving treatment to my family and community. There will be no need to take them to other doctors. I’ll be taking care of them.”

More than an education

Getting back to school isn’t just about the chance to learn. Education is protection.

Earlier this year Save the Children helped interview more than 1,100 children in Sierra Leone about the impact of the Ebola crisis on their lives.

They reported a direct link between being out of school and increases in child labour and exploitation, exposure to violence in the home and community, and teenage pregnancy.

Although they are now in school Ibrahim leaves me in no doubt that they will continue to need all their strength, and all our support, to carry on.

He says, “I feel bad because of my family that has passed away. I always think of them, especially my uncle. When he was alive and difficulties came my way, I would go to him and ask him and he provided for me.

“Now food is hard because my uncle is not alive. Every time we go to sleep hungry I think of my uncle and that this is not the way we lived before. I often sleep hungry.”

Children affected by Ebola need food, education, emotional and psychosocial support. These are the challenges we must face if Ebola is to take not just their friends and family, but their futures as well.

Over the next year, the EU Humanitarian Aid and Civil Protection department (ECHO) will be supporting Save the Children to help more children in Sierra Leone return to school safely and increase their resilience to future emergencies.