Action 2015: it doesn’t get more important than this 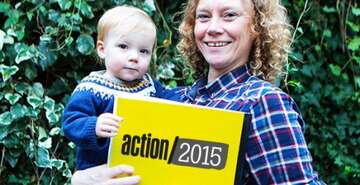 2015 is an exciting year to be a campaigner for children and I’m looking forward to the hard work that I and the team at Save the Children are going to be putting in over the next twelve months.

We have a unique window of opportunity to make lasting progress that could transform the lives of billions of people, including saving the lives of millions of children. It doesn’t get more important than this.

Within three months of each other, at UN summits in New York and Paris, new global targets for accelerating development and addressing climate change will be set.

At Save the Children we want world leaders to agree to end preventable child deaths by 2030 and back this objective with a credible plan.

Of course, the problem is that without public pressure leaders will be unwilling to make the commitments we need.

That’s why Save the Children is proud to be a leading member of the action/2015 coalition and why we will be doing everything that we can to reach out and engage the public here in Britain and right across the globe.

To give an idea of the scale of this endeavour, action/2015 now has more than a 1,000 member organisations in 126 countries. It’s a huge undertaking, one of the biggest campaigns in recent history.

And even more important than its size is the fact that action/2015 unites campaigners around the three defining issues of our time; poverty, inequality and climate change.

We want every Save the Children supporter to take an active part in the action/2015 campaign throughout this year.

January is just the launch. The campaign will build throughout the year ahead of the key decision making moments at the G7 summit of the world’s richest countries in June, a major meeting of all countries in July and will climax with the unveiling of the new development goals in September and a new climate treaty in December.

As part of this we expect tens of millions of people around the world to mobilise and billions to be reached. I hope you’ll be one of the former (now you’ve read this far I’m already counting you as one of the latter…). Together, we can make 2015 really count.

Of course, by the end of the year we will not have achieved everything we want; but it’s possible that in a few years we’ll look back on 2015 as a year that really mattered and that we can be proud of the part we played in it.