Why should we care about data? Building a data revolution for equality 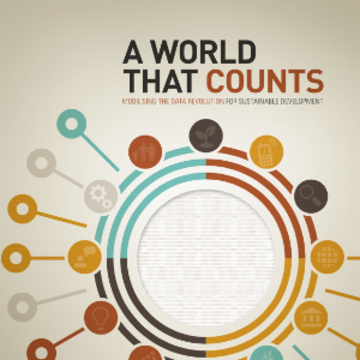 Earlier this month the UN Secretary-General’s advisory group on the data revolution released its much anticipated report, A World That Counts. The report will feed into the Secretary-General’s synthesis of recommendations for the post-2015 global development agenda.

But why should we care about data?

The report itself puts it well:

Data are the lifeblood of decision-making. Without data, we cannot know how many people are born and at what age they die; how many men, women and children still live in poverty; how many children need educating; how many doctors to train or schools to build; how public money is being spent and to what effect.

While we currently know more about the world than ever before, the coverage and quality of data about poverty and sustainable development across the globe are shockingly low. The fact that nearly 230 million children have not had their births registered, rendering them invisible to policy-makers and unable to claim basic rights, is a case in point. An estimated 250 million of the world’s poorest and most marginalised people are estimated to be left out from surveys and censuses. And around 70 countries don’t have high-quality data on child mortality for the past five years.

Such data gaps have led to calls for a global data revolution to ensure that global efforts to end poverty are supported by robust base of transparent and usable information, and that citizens are empowered to use this information to hold leaders to account. But while everyone agrees that a data revolution for sustainable development is a good idea, the development community has been struggling to define what it might mean in practice. The independent expert advisory group’s (IEAG) report is therefore timely and welcome, helping to bring the various strands of debate together. It may well have done this more effectively had time been allowed for proper consultation. But, nonetheless, the report helps to move the debate on, particularly through the progressive values that are embedded in its narrative. These include:

If these values gain traction there are grounds for optimism for a genuine, transformative revolution. Together with the report’s practical recommendations and principles, they provide good foundations to move from discussion to action, and from there, to change.

There are, however, areas in which the report could have gone further, most notably on inequality. Unfortunately, the report’s important assertion that the data revolution can be a revolution for equality is lost in its recommendations. While the IEAG recognises the need for disaggregated data, it missed the opportunity to make a clear recommendation that, in the context of limited resources, focus should be placed on improving data coverage and meeting data needs for the poorest and most marginalised first. This will be critical for assessing whether all social and economic groups are on track for meeting post-2015 targets, rather than relying on national averages that can mask significant inequalities in progress.

The report recognises that special steps need to be taken to bring the poorest and most marginalised into the revolution, and goes further than the original draft in this regard. But no detail is provided on what these steps might look like in practice, and the recommendation gets somewhat lost in an overwhelming focus on digital technologies and international institutions. Recommendations include, for example, World and Users Forums to foster innovation, global public–private partnerships to advance data sharing, an SDG visualisation platform and dashboard on the state of the world….

It’s not that these recommendations aren’t good. But there’s a danger that they’ll serve to reinforce data divides rather than help mitigate them. It would have been helpful if they had been accompanied by a clearer, more explicit set of recommendations for ensuring that poor and marginalised communities can both contribute to and gain from the data revolution, for example, through participatory data collection and monitoring, and linking global  and national initiatives to community and activist networks, and traditional and community media.

There’s a lot of important material in the report for the global community of data revolutionaries to digest and take forward. But in drawing on this material to define his own vision of the data revolution, the Secretary-General should remember another core principle that’s gained traction in the post-2015 process so far – the need for the new development agenda to leave no one behind. The data revolution must be a revolution for equality. But it will only be so if it’s geared towards the world’s poorest and most marginalised people, and driven in partnership with them.