Typhoon Haiyan: Zyrus, a local helper with a broken boat but a fighting spirit

So keen was Zyrus, a local volunteer, to join Save the Children’s relief effort that he forgot to register with his local council. The result was that he was reported as missing. He has since helped to deliver tarpaulin, hygiene kits and household items to thousands of families. “I wanted to join the distribution team because I saw how grateful people were when they received something and I wanted to be a part of that,” he says. “I love my job.” 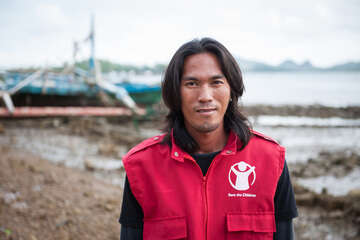 Zyrus only just survived the storm himself. He was working for the sea patrol; he and the rest of the crew took shelter on a nearby island. “I could see boats capsizing and crashing into each other. The sea waters were rising so quickly and trees were falling over. I was cowering under a coconut tree.”

A broken boat and rising waves…

The typhoon broke Zyrus’ boat in half. “By about 4pm, the waters had receded to about waist height and we decided to wade out and make our way back to the mainland. There were about eight adults and a teenage boy by this point. When we got halfway, the waters started to rise again and big waves were crashing around us.”

Zyrus takes a deep breath before continuing. “A strong wave separated me from the boy and I realised he was not strong enough to withstand the waters. He started to yell, ‘Help me!’ We got close and I reached out for him and grabbed him. But while all this was happening I was slipping underwater and was almost drowning – the waves were so big. I kept swallowing so much sea water… but still, I had to save him. I told him, ‘You have to hold on to me, I have to swim and can’t hold on to you as well.’ It took a while before we reached the shore and that was when I passed out.

“Just before that I remember waves hitting me repeatedly and rolling on to the sand and thinking that I was so glad it was sand and not rocks, or I would be dead. The boy then dragged me somewhere safe and ten minutes later I regained consciousness. We walked for one and a half hours to where he lived. After leaving him at home, I carried on alone but it started to get dark. Suddenly I tripped and realised I had tripped over a dead body. I nearly fell on him. Then, I saw a broken torch in the sand, dug it up and used it to guide me to the next town.”

There, Zyrus’s horrendous journey finally came to an end. “I went into the town hall where I met my aunt and brother-in-law. They told me my family were all right. It was a massive relief.”

Zyrus is remarkably modest about his heroic actions, shifting awkwardly in his seat as I ask him one final question: does he have any contact with the boy he saved? “Yeah, I have seen him and his family since… I always ask if he is OK. His mother and aunt rush up and hug me every single time they see me. You see, if other people are happy, then I am happy.”

Voices from the field - Asia

Voices from the field - Asia