Syria: The crisis has lasted three years too long

by Farah Sayegh, Save the Children Jordan 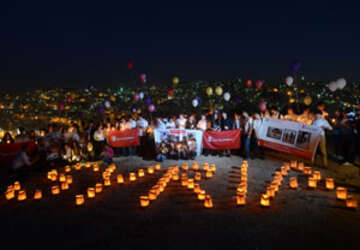 I recall our team working tirelessly, exactly a year ago, to prepare for our candlelit vigil to mark the second year of the Syria crisis. At the time we were trying to direct the world’s attention to the half a million children who had become refugees and the 1.2 million others in need of assistance inside Syria. Save the Children’s aim was to highlight the appalling suffering children faced in this harsh conflict and send a message to world leaders demanding peace after two years of war.

It was also around that time that the number of Syrian refugees topped one million. That’s a million people forced to leave homes and schools and embark on a new and difficult life outside their beloved Syria.

Now another year has passed and refugee numbers have reached 2.5 million. How much more suffering is the world waiting to see before putting an end to this crisis?

And still we are waiting to be allowed to bring aid to all those  in need. There’s a UN Resolution, yes. But it must be fully implemented as swiftly as possible.

In March 2013, over 2,000 schools were reported to have been targeted and damaged inside Syria. Today, this number has doubled.

Last year, there were 500,000 Syrian refugee children; now it’s 1.2 million, and neighboring countries are struggling to provide for them. If these children do not get the education and protection they need we are at risk of losing a whole generation.

A few months back, I met 10-year-old Amira who was caught in an explosion last year as she was escaping Syria with her family. Due to the dreadful state of Syria’s hospitals and the low levels of medical supplies, she wasn’t able to get proper treatment for the severe burns across her body and face. Now in Jordan, Amira is still struggling to regain her confidence and to learn to live with the scars this crisis has imprinted on her.

Despite this, Amira was fortunate to be one of the 1.2 million children who managed to flee the violence and find refuge in a neighbouring country. But there are 4.3 million children still inside Syria going to sleep hungry, sick, or afraid, yet still being denied access to basic humanitarian assistance.

Most of them have been missing out on education for three years – that’s 1,095 days of maths, science, history, and geography classes. Children have been paying the highest price in this conflict and what we owe them is to make 1,095 days mark the end of the suffering and bloodshed in their country.

I am preparing this year’s vigil in Jordan spurred on by the hope that March 2014 will mark the last war anniversary for Syria. From New York City all the way to Seoul, the world will enter this third year shining a light of hope in solidarity with the people of Syria, but most importantly and what makes this year’s vigil more special is the light that will shine back: from Syria’s children themselves, from Za’atari refugee camp.​