For three years,Syria’s children have been suffering as their country is ripped apart by war.

Save the Children and our supporters have been doing everything we can to help get life-saving aid to those inside the country who desperately need it.

Every campaigning victory, big and small, has helped to bring this achievement a little closer.

Thanks to yesterday’s unanimous UN Security Council resolution to authorise cross-border aid convoys into Syria, that goal seems even more firmly within our reach.

And it wouldn’t have happened without you…

Thousands of our supporters called on our Deputy Prime Minister, Nick Clegg, to highlight the plight of Syria’s children. Three of you even met with him to ensure that our campaign message was at the front of his mind before he attended the Assembly.

It worked. Clegg spoke out for Syria’s children, raising the profile of the issue at this important forum. But our next target was the UN Security Council – the global superpowers who make the ultimate decisions on global peace and security issues.

Thousands of you emailed our Prime Minister asking him to unite the global powers around a resolution on humanitarian access. As a result, a Presidential Statement was passed which, while not legally binding like a Resolution, was an important show of unity by the Security Council.

Yet it remained a commitment on paper, when we needed real action on the ground.

We launched a campaign targeting the man in charge of these talks – Lakhdar Brahimi, the UN Peace Envoy to Syria.

Thousands of you joined people around the globe asked him to deliver the message: Do not target children. Despite Brahimi’s positive response to our petition, the peace talks were unfortunately put on hold.

February 2014: a Resolution at last

The UN Security Council at last reached a historic agreement, in the form of a legally binding Resolution demanding humanitarian access to vulnerable children and their families throughout Syria.

It was a glimmer of hope for those in need of life-saving aid but we remained cautious: it still had to translate into change on the ground.

15 March 2014: the third anniversary of the Syrian conflict

To mark this grim anniversary, people took part in vigils in over 40 countries, sending a single message: Don’t let the people of Syria lose another year to bloodshed and suffering. All over the globe, people made clear they stood #WithSyria.

Then finally, yesterday, after months of mounting pressure… another Resolution

We’re hopeful that by eliminating a point of controversy around the legality of humanitarian operations across Syria’s borders, the UN and its partners will be able to accomplish what they initially resolved to do: scale up the delivery of aid to reach children and their families trapped inside a country at war.

Thank you to all of our supporters for accompanying us on this journey – you have consistently made sure that world leaders were not able to turn away from their obligation to Syria’s children. 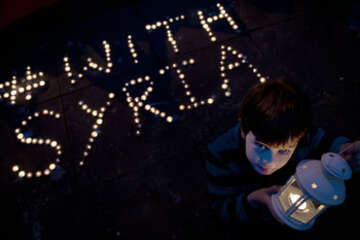