Mary* is 14 years old but she has been through more than most teenagers. Mary fled her hometown when fighting broke out in December last year, but not before she saw many people killed. For six days, Mary and her family fled on foot through the open bush, carrying only beans and lentils for nourishment. They had left everything behind, and had no idea what was ahead of them. They were terrified.

The sound of gunfire once more

The family left their home when fighting first broke out, but later heard that the area was safe and so they returned. Then, early one morning, they heard the sound of gunfire once more.

Mary told me, “When the fighting started, I saw people using guns. I was terribly afraid, because I saw people falling dead outside.”

The family fled, this time for good. 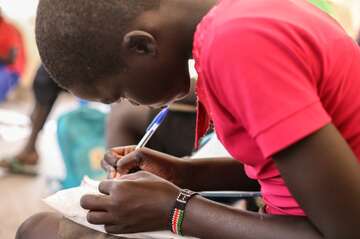 “We all held hands and made a chain so we could run together.”

“We fled all together. It was difficult to travel with the small children, because they couldn’t run very fast. We all held hands and made a chain so that we could run together. We had no idea where we were running to; I just felt like I was going to die and there was no hope of living.”

Mary and her family had to make a difficult journey, crossing the River Nile by boat to Awerial. Once there, they had to create a home for themselves in the open bush.

“All there was here was water, and the bush. We used wood from the trees to build shelter, and were given plastic sheets,” Mary told me.

“When it rains we get wet because we have no bedding and the plastic sheeting is torn.”

Save the Children are helping people in remote areas

Despite the hardships she continues to face, there is one aspect of her new life that Mary really enjoys. She has started coming to the Child FriendlySpace set up by Save the Children in the remote part of Awerial where she now lives. Before Save the Children started work here, there was no school or place to play.

“It is good to be educated because then you can read, you will know what is going on, and you can get what you want from life,” she says. Now, Mary is able to continue her education, which is essential if she is to achieve her dream of becoming a doctor.

*Name has been changed to protect identity