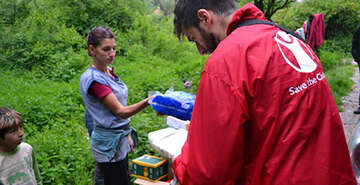 As Bosnia and Serbia experience the worst floods in decades, Save the Children is doing whatever it takes to help vulnerable children and their families in the worst affected areas.

The city is currently cut off because of the severe flooding, and the boats will be used to help evacuate children and their families to safety.

Meanwhile, we’ve started to distribute essential relief to children and families affected by the floods, and continues to assess and respond to the needs of the most vulnerable, including street children and poorer – mainly Roma – communities in some of the worst-hit areas.

Four days of ongoing and heavy rain have caused some of the worst floods in this region’s history, affecting over 1.5 million people.

The floods and landslides are likely to have moved the mines left over from the Bosnia war of the early 1990s and destroyed or washed away warning signs, creating a very serious and long term threat for communities living here.

“We are especially concerned about children’s safety and welfare, given how vulnerable they are during floods like these’, said Andrea Zeravcic, Save the Children’s Director in Bosnia & Herzegovina and Serbia.

“We are focusing in particular on children and families living in makeshift homes or on the street, who do not have any shelter against the rains.”

More than 35 people have been killed dead in Bosnia & Herzegovina and in Serbia, while dozens of landslides have destroyed homes and continue to hamper rescue efforts.

The Serbian city of Obrenovac, where hundreds of homes have already been flooded, is being evacuated amidst fears that a nearby dam may break.

Despite water slowly receding in some areas, there are also strong concerns that the river Sava may break its banks, which would affect the whole of northern Bosnia as well as the Serbian cities of Sabac, Sremska, Mitrovia and Belgrade.

As flood waters have reached the second floor of apartment buildings and hundreds of thousands remain without power, the search for missing people has intensified in both countries.