Reading England’s future: how are poor children in your area doing?

Reading is something most of us take for granted. We probably can’t remember ever learning how to do it. And now we do it every day without even thinking about it.

That’s a big issue – reading is a fundamental life skill. If children are already behind in reading at 11, they’re likely to struggle to ever catch up. 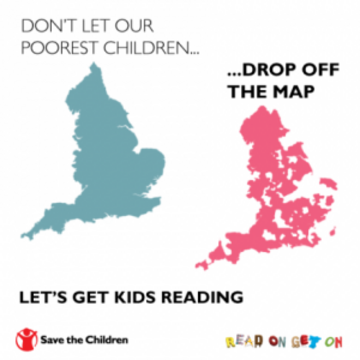 All children reading well at 11

Our new report – Reading England’s Future – follows the launch of the Read On. Get On. campaign – a coalition of Save the Children and lots of other organisations that’s driving a historic national mission for all children to be reading well at 11 by 2025.

What’s new about this report is it shines a light on the geographical differences across England in the reading achievement of children from low-income families. Those children make up nearly a fifth of all pupils – and they’re the children more likely to be behind in reading. We need to know more about where they are.

That’s what our new report addresses. It looks at how well poor children are reading at 11 across England by parliamentary constituency.

A challenge for the whole country

No area in the country currently has all children reading well by age 11. Low-income children falling behind in reading is an issue in all parts of the country and in all regions.

But the scale of the challenge varies markedly in different areas of the country. Around nine out of ten poor children are reading well by 11 in the best performing areas. But elsewhere it’s a very different story. In the worst areas, four out of ten children from poor families are falling behind.

What’s the picture for the poorest children in your own area? Find out now – you may be surprised by the result.

So where’s the biggest challenge? The inner cities? Actually, no.

Our analysis shows that children from disadvantaged backgrounds are more likely to be behind in other parts of the country – in many leafy suburbs, rural areas and seaside towns. And regionally, poor children in the South East (outside London) and the East of England appear to be faring particularly badly.

London on the other hand performs well . No London constituencies appear in the worst performing 25% for low-income children’s reading. Likewise in some other big cities – Liverpool, Manchester and Birmingham.

But, shockingly, while low-income children’s reading improved by an average of 13% nationally over the last decade, in 35 areas it actually got worse.

The future of our poorest children shouldn’t be determined by their postcodes. Together we can change this.

Act local
The success of this campaign will depend on local as well as national action. If we’re going to achieve the Read On. Get On. ambition, local communities, schools and parents will need to to work together and inspire locally driven change with solutions unique to the particular challenges each community faces.

It’ll take all of us – parents, grandparents, businesses, volunteers, teachers, role models like footballers and musicians, politicians – to get all children reading well at 11 by 2025.

Help build this movement by taking action. Share your area’s results with your MP and ask them to join the campaign today.

The success of this campaign relies on everyone doing their bit to give young children a love of reading that can set them up for life. Join us today.
• Read the report to learn more.
• Find out how your area is doing and join our campaign.