On World Humanitarian Day we are thinking of the local heroes

For many, the phrase ‘humanitarian work’  conjures images of UN helicopters and aid convoys.

Of brave staff in foreign lands risking their lives to get aid to those who most need it.

This is certainly part of the picture.

Not foreigners but nationals

But what many do not see is that most humanitarian workers are not foreigners but national staff, working against great odds to help their family, friends and neighbours.

These are the people who drive our emergency responses forward in some of the most challenging settings imaginable.

These are the men and women who spend months sleeping in tents, working 18-hour days and living far from their own families.

These are the people, unfortunately, we do not see enough of on our TV screens.

Today I think of my colleague John Garang, a Child Protection Officer I met recently in South Sudan.

To me, John is the quintessential humanitarian. His passion shines out, from his big grin to his disciplined work ethic. It’s infectious.

But John’s drive also comes from a story of struggle and survival. John was himself one of  thousands of children whose lives were forever changed by conflict.

Fear and an empty stomach

In 1986, John’s village was attacked and he became separated from his family in the chaos.  Aged just 14, he found himself alone. He walked for days, in a state of dread and delirium.

With no food or water, he had only fear to occupy his empty stomach.

However, even as a young boy, John would not be defeated. He realised, ‘I must not sit down’. Instead, he got up and walked day and night until finally, a man came to his rescue. This man, whom John did not know, cared for him until he regained his health.

One of thousands of displaced and orphaned children known as the ‘Lost Boys of Sudan’, John moved from camp to camp before  settling in Kakuma Refugee Camp in Kenya.

There, he went on to complete his education and become a teacher.

When the ceasefire agreement was reached, he went back to his hometown, Bor. Now a man, John was reunited with his family. It was there that he first came to work for Save the Children.

‘Save the Children was here before, during and after the war’ John told me, ‘that’s why I wanted to work for them’.

John has worked for us all over his country, showing his strength and ability during various crises where children were in need.

‘We really made history’ he tells me, talking of the terrified children his team helped to reunite with their parents in Nimule, during the recent outbreak of violence. 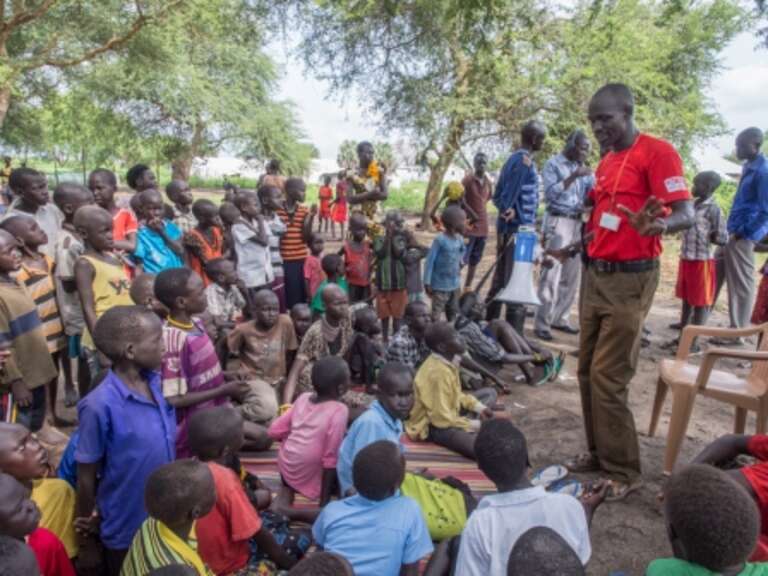 I think of the children John works with, ensuring they have safe places to play, recover and become children again.

Many of these children have seen unimaginable suffering and bear the emotional scars of war.

But as that man did for John some 30 years ago, John gives these children hope. He tells them not to sit down. He helps them to walk again.

When I met John he told me ‘this simply had to be my job’, and I am so glad it is. John’s story makes me proud to work for Save the Children. It is him I am thinking of today.