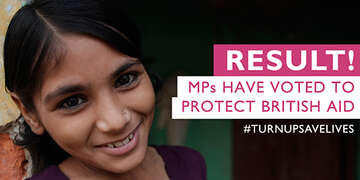 This afternoon a Private Member’s Bill passed its second reading in the House of Commons. The UK’s commitment to spend 0.7% of national income on aid is one step closer to becoming the law of the land.

That would mean any future government who wanted to cut the UK’s aid will no longer be able to do so without introducing new legislation.

Save the Children supporters played a key part in lobbying their MPs to turn up and vote in favour of Michael Moore MP’s bill by emailing, tweeting, calling and visiting their Westminster representatives.

It’s not in the bag yet. There are a few more hurdles before the Bill receives royal assent and becomes law.

But the margin of victory in today’s vote was comprehensive, with 164 MPs in favour and just six against.

“Parliament took a giant step toward making history today,” said Save the Children CEO Justin Forsyth. “To enshrine in law the commitment to spend 0.7% of national income on aid, a long term guarantee of help to those who need it most, will save millions of children’s lives.”

“This is a landmark moment for our country and a time to be proud.”

That target has been the development aid benchmark for the world’s richest countries for over 40 years now, though only a handful of them have got there.

And it makes an amazing difference. British aid already saves – and transforms – the lives of an incredible number of children every year. With this firm commitment, we will be able to do far more.

Thanks to British aid, every two seconds a child in a poor country gets vaccinated against deadly diseases – saving 1.4 million children’s lives over four years.

Between 2011 and 2014, British aid has also helped give 10.2 million children the chance to go to school, and provided millions more with improved access to vital healthcare, clean water and improved hygiene.

Enshrining the 0.7% in law represents a giant step towards making sure that our generation is the first to ensure that no child dies from a preventable or treatable illness like diarrhoea, pneumonia or malaria, or because they don’t have enough food to eat