Yesterday, I visited a refugee camp for the first  time. Za’atari in Jordan is in the middle of the desert, roughly an hour and a half’s drive from Amman and about 12km from the Syrian border. It’s the second biggest refugee camp in the world after Dadaab in Kenya and I was keen to learn more about a place I have read so much about over the past year. 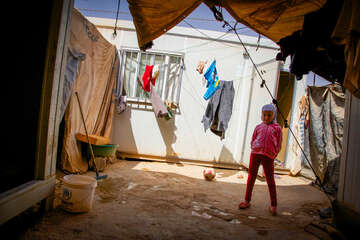 It struck me as very well organised. You see row upon row of UNHCR-branded tents, which are now being upgraded to caravans because of the winter. The Syrian refugees are incredibly entrepreneurial and what is known as the “Champs-Élysées” has sprung up: a street in the camp with an ice-cream parlour, mobile phone stores and even a shop selling wedding dresses. Still, life as a refugee is tough. Four or five people  live in a tent or caravan with shared latrines and showering area and while some run shops and work as waiters there are not enough jobs for all. Many Syrians prefer to move out of the camp, feeling they have more dignity living in communities within cities or towns.

In partnership with the UN World Food Programme, Save the Children is the sole distributor of food for the whole camp, giving out 500,000 pita breads every morning. Since September, we have been moving towards a food voucher scheme to give people more choice on what food they want for their families. In partnership with UNICEF, we are also running 36 Child Friendly Spaces (CFSs) where children can learn, play and receive psychosocial support in order to regain a sense of normality after the trauma they have experienced in Syria.

Most refugees fled from Syria with little more than the clothes they were wearing and all the children I met were wearing flip-flops, or no shoes at all. TOMS shoes have donated 90,000 children’s canvas shoes to Za’atari camp, in addition to a number of countries where Save the Children works around the world. I was there for the very first day of their distribution, which was very special.

Every child registered at one of our CFSs is eligible to receive winter boots. We measure their feet and then take them to the distribution centre with their shoe size written on their arm. The boys come in the morning and girls in the afternoon, since here, girls go to school in the morning and boys in the afternoon. It was an impressive operation by our staff and by Syrian volunteers helping them: with a large-scale distribution like this, the potential for things to go wrong is high. 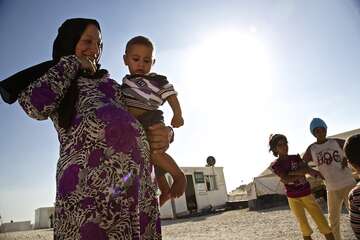 I was there for the girls’ boot distribution which was completely joyful: the smiles on the little girls’ faces as they received their new boots were heartwarming. As we left, we heard them singing happily on their way to the bus that would take them back to their tents.  “This,” said our Programme Director, David Hassell, “is what our work is all about”.