Iraq: I survived Saddam’s chemical attacks but I never imagined a crisis like one 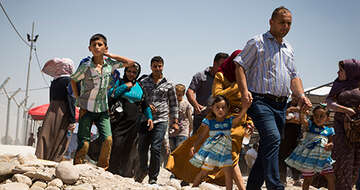 The Mar Yousef church in Erbil in northern Iraq is packed with people lying on thin mats and blankets or straight on the hardwood floor.

Mothers cradle crying babies, children look forlornly across the sweltering room to the world outside, knowing too well that this isn’t a summer holiday, while their parents try desperately to work out their next move.

Most here are seeking whatever help they can get, having fled the fighting further west as it was upon them, fortunate to escape with their lives let alone any supplies or possessions.

Outside the city boundaries there are still hundreds and hundreds of people waiting along the road, many of whom travelled by foot, desperately hoping to be let in.

Next to an abandoned building on the main road into town, a pregnant mother about to give birth sits nervously with her husband, who feels decidedly helpless.

The mother tells us she could feel her baby’s heartbeat getting weaker and weaker.

The tension is palpable and the devastation everywhere.

I’m an Iraqi citizen who has been working with Save the Children here for 17 years. I was displaced too back in 1988 after fleeing and surviving a chemical attack on my town, Halabja.

But in all my time I could never have imagined a crisis like this – so many people fleeing so suddenly, such terror in people’s eyes. I fear for my nation’s future, and for communities like the Yazidis, many of whom have only just been freed from Mount Sinjar.

Now some of them are fleeing into Syria. Dozens of children died on that mountain from dehydration, a most horrible and preventable way to go.

Just days ago a teary eyed Yazidi politician told parliament how her people were being slaughtered, and that their ancient minority religion, which derives from Zoroastrianism, was “being wiped off the face of the earth”.

Women were being enslaved as “war booty”, she said. Religious and ethnic minorities like the Yazidis are the latest victims in this rapidly escalating humanitarian crisis in Iraq, which has seen more than 1.2 million people – more than half of them children – displaced in just over two months.

This is on top of the 230,000 Syrians who have fled to Iraq because of the war across the border.

Our teams are helping

Save the Children teams  has already reached more than 100,000 displaced Iraqis this year, including 14,000 in the past week alone.

Our staff have handed out water, sleeping kits and hygiene items like soap and toothbrushes. But the level of needs is growing rapidly, pushing the crisis to breaking point.

Not only are the displaced battling to survive each day, they don’t know how long they can stay wherever they are, if they will need to flee again or if their lives will ever return to normal.

When and how this ends, nobody knows. What we do know is that humanitarian aid is desperately needed to keep people alive. The road ahead is long and the international community needs to step up now to save Iraq before it falls beyond repair.