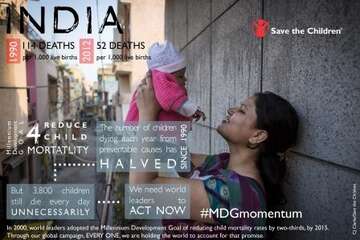 On 18 August, there were 500 days left to meet the Millennium Development Goals (MDGs).

The world is on the brink of a major breakthrough in ensuring mothers, newborns and children in the poorest parts of the world can survive and thrive.

And India is at the forefront of this revolution.

That’s a decrease of 70% – particularly impressive given that the global figure for the same period has been 48%.

Bringing down the under-five mortality rate

But it isn’t enough. We continue to lose 1.4 million children a year before they see their fifth birthday. More than half of those are newborn deaths – a particular challenge for India, which accounts for 26.6% of all newborn deaths globally.

A baby’s first day is his or her most vulnerable. If we want to see real progress on child survival it is vital that we find ways to protect these fragile new lives.

From pledges to action
India has already initiated a nationwide push to reach every mother and newborn with essential healthcare services.

The strategy aims to build on existing partnerships and forge new ones, bringing together the business sector, private individuals, training institutions, civil society and faith-based organisations to deliver unprecedented breakthroughs in newborn and child survival.

A Minister speaks out

India’s Health Minister, Dr Harshvardhan, has spelled out this government’s commitment to accelerating progress on maternal and child survival.

Speaking in Washington DC, he said: “It is now evident that with sustained efforts across the globe with a focus on equality, the goal of ending preventable child and maternal deaths by 2035 seems well within our reach.”

Political will is the most important initial factor in achieving any large-scale change. Dr Harshvardhan’s words made clear that we have that.

We know that curbing child mortality levels in India will make a massive difference to global child mortality figures. The world is looking to India to turn our pledges into reality.

Today we are at a critical point and success seems within our grasp. Even with fewer than 500 days to go, one final push will indeed see India achieve the MDG targets on maternal and child survival.

Will India surprise the world?