Sierra Leone: surviving Ebola is hard when loved ones die

In Kailahun, in a remote village at the epicentre of Sierra Leone’s Ebola epidemic, Annalita* and her little boy David* live in a village of around 20 small houses.

The derelict village headquarters is a looming relic of the civil war that ended more than ten years ago but today, this village is in the thick of another deadly battle. Annalita and David are its veterans.

Ebola comes to the village

“My husband was the first person to catch Ebola in this village”, she tells me. “I don’t know how he got it. In less than three days he died. We had heard of Ebola, but I never thought this could be it.

“One day I went to market and started feeling sick. My body started hurting. Then my son William* developed the sickness. Within days we were vomiting. And in time three other people got sick too.

“They took all five of us, , and my other son David, to the centre in Kailahun.

“Only the two of us came back.”

“When I think of him I cry”

“William and I were in the same booth. He fell from the bed to the floor. I was too weak to get up. I just had to lie there looking at him. The nurses came and checked, and he had died. I remember, of all the children I gave birth to I suffered most for him.

“When I think of him I cry. He was very stubborn, and would never listen to anyone.”

But David, 2, had been discharged, Ebola-free, and was taken to an Interim Care Centre supported by Save the Children. When Annalita started to feel better, he came to visit.

“If David had died, it would have been too much for me,” Annalita says. “We had one hour and there was a fence between us. I said, ‘I am getting better, and by God’s grace we will be together again’.”

Annalita was right. She was soon able to take David home. But for Annalita, David, and so many others who have survived Ebola but lost those they loved, coming home was hard.

“When I returned to the village people would greet me but not get close. I didn’t feel bad. I knew they were trying to save people’s lives. Some would sit with me. Some would not. I could understand their fears.”

With the help of social mobilisers trained by Save the Children, Annalita and David have been slowly welcomed back but the fear of Ebola still courses through this community.

“Now, if people from this village try to go to other villages, people throw stones at them. But we are afraid of them, too. We don’t want strangers here.” 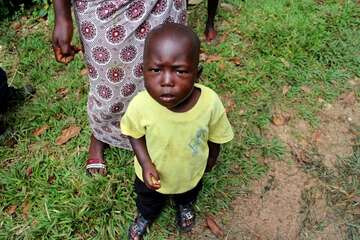 The number of confirmed Ebola cases in Sierra Leone has now passed 4,000. In reality the figure is likely to be far higher.

One of the key elements in the fight against the disease is contact tracing – monitoring and following up everyone who has come into contact with Ebola patients to ensure that if they develop the disease themselves they are cared for in isolation, and do not risk passing it on.

Here, deep in the bush, the scale of that challenge could not be clearer. Save the Children is training and supervising contact tracers and providing bicycles to help them make difficult journeys, chasing after Ebola wherever it strikes.

Over 870 children in Sierra Leone have lost one or both parents to Ebola, and the numbers continue to climb. Annalita and David have won their battle against the disease, but their struggle with grief and loss is common to thousands of families across West Africa.