World Refugee Day in Syria: “We are bearing witness”

Fadi* was 9 when his village came under siege. His mother tells me that Fadi was brave, and insisted on being the one to gather food and water for the family, even when the bullets were flying. Without his father at home, Fadi was the man of the house.

He is nonchalant about this remarkable courage when I ask him. “Some children are brave, and some get afraid and go and hide. Some are scared and others cry, and others are like me and are brave.”

The 10-year-old shrugs, not wanting to dwell on it, but perhaps secretly delighted to have his bravery recognised in front of a group of people. 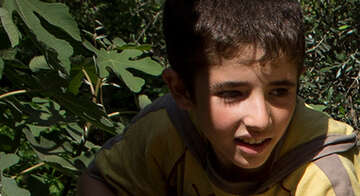 Although Fadi gathered supplies in Syria when he could, they quickly ran out. With no safe routes in and out of the village, families were trapped between armed men and hunger.

“People kept trying to leave but it was very difficult. They would leave in small groups: maybe 10 or 20 people. This was because we knew that large groups would be killed. One group went after another.

“There was a crossing which was pot luck whether or not you would be shot dead going through, you might cross, or you might not. It was very dangerous and so difficult that our hearts were racing until we arrived. We called this journey the ‘death journey’.”

I ask Fadi what it was like in his village before he left. “I saw that when they see a child they shoot without hesitating. In our school they aimed missiles towards us, and when the missiles hit the school it destroyed half the building.

“I was not at school that day, but I saw it on fire.  I have seen many bodies – in the streets, thrown outside homes, and even in the river. Some people you just never find.”

“You may never understand”

All of these words spill out of Fadi in a rush and he barely pauses for breath. He says he wants to talk about these things. But then he explains that we may never understand.

“Honestly, if I told you what Syria was like, and what those men have done to us, you would not believe me.”

Sometimes I wish that was the case. That maybe I could forget or dismiss the things I’ve heard as the wild imaginings of children. I can’t. I’ve seen torture scars on nine year olds. I’ve seen bullet holes on ten year olds.

Women have shown me pictures of their dead children, and I’ve seen grown men weep while describing the slaughter in their homeland.

I don’t think we will ever be able to forget the things I have heard here. And I don’t think we should. What Save the Children is doing is bearing witness to the lives of families surviving the worst excesses of war.

Even if these stories don’t get the airtime they should, they are written down, they are now a part of history. These families’ lives and their losses matter.

Their testimony can be denied, it can be covered up or ignored, but it can never be unwritten.

*name has been changed to protect his identity

Read more reports by Catherine from the Lebanon/Syria border here and here.