Monday 19 August is World Humanitarian Day. It’s an opportunity to pay tribute to the remarkable courage and commitment of humanitarian workers who carry out life-saving work in the toughest places in the world.

The following article tells the story of one Save the Children humanitarian worker, Hadeel, who is supporting refugee Syrian children in a camp in the Iraqi desert. 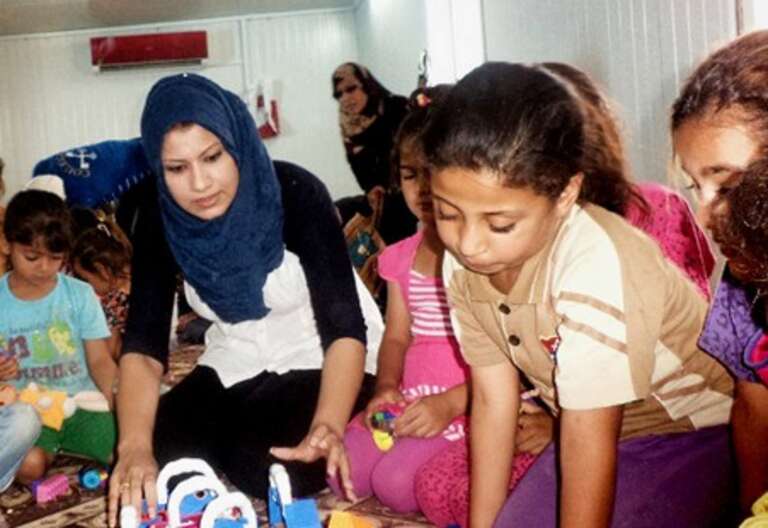 Nine months ago Hadeel, a well-educated 28-year-old psychologist from Baghdad, made a brave decision.

She left her career, friends and family and moved 450 kilometres away to the Iraqi desert to work as a child protection officer for Save the Children in the Al Obeidy refugee camp, helping children who have fled the devastating conflict in Syria.

Hadeel was the first woman to come to work here. She came because she’s passionate about caring for the most vulnerable children.

“I was offered ‘better’ jobs back in Baghdad where I have my friends and family, but I wanted to work in child protection and so I ended up here,” she explains.

“When I arrived in the camp for the first time, the conditions were really bad. It was very unclean and with a distinct smell of trash,” says Hadeel.

“We had serious concerns about the impact on the children’s health,” she adds. “There was a complete lack of services for the refugees in the camp.”

“To be quite honest, the situation hasn’t changed much since. It’s dire.”

Part of Hadeel’s commitment to help refugee children from the Syrian conflict comes from her own experience as a child.

During the Iraq war in 2003, she and her family had to flee Baghdad. They went to Syria, where they stayed for a year.

“While living as a refugee in Syria, I experienced first-hand how children fleeing their home need special care and attention,” says Hadeel.

“I feel that I owe it to the Syrian people to support them the best I can, since they supported my family and my people ten years ago.”

Reports estimate that at least 7,000 children have already lost their lives in the conflict in Syria. Stories of the abuses of children such as torture, sexual violence, beatings and threats are widespread.

Around 2,000 Syrians – more than half of them children – have sought refuge at the Al Obeidy camp.

“The children are very affected by what they have been through,” says Hadeel.

“They don’t want to talk about their experiences,” she says. “But from their behaviour and their paintings it’s clear that they have experienced things no child should go through.”

“I remember one girl who came to our child-friendly space. For the first couple of months all she drew were pictures of war and weapons destroying her home.”

“We try to restore as many parts of the children’s normal life as possible,” says Hadeel.

“We have a wide range of activities,” she explains. “Some are designed to keep the children physically active. Some are focused on getting the children to express their emotions through painting, drawing or storytelling.”

Other activities give children the  opportunity to develop new skills, such as computer training, and to learn about children’s rights, hygiene and health.

“We had a five-year-old girl who attended our child-friendly space but didn’t really participate,” says Hadeel. “She just kept to herself. She was very sad and had clearly been harmed by her experiences in Syria.”

“The staff put a lot of effort into getting her involved, while giving her room to draw by herself,” says Hadeel.

“Slowly, after two months, she started to open up. Now she participates in the activities and builds relationships with the other children.”

“This isn’t an easy place to live,” says Hadeel. “But my work with the children means a lot, and we’re really making a difference.”

“Many of the children tell us that when they return to Syria they want to work as teachers or as children’s activity facilitators and volunteers with Save the Children,” says Hadeel.

“It gives a sense of hope for the future.”

This blog post was written by Tue Jakobsen, Communications Officer, Save the Children in Iraq