Syria: The decision to escape 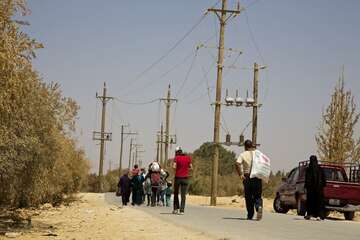 Two reasons. That is what most of the refugees give when I ask why they decided to flee and take on a perilous journey. Firstly, security and the simple fear for their lives and their families. Secondly, Syria is a country in ruins. With its eroded infrastructure, simply getting by, finding water and bread, has become nearly impossible for many.

So in the end, the refugees don’t have a choice. They risk their lives by staying, and they risk their lives by embarking on a long journey whose destination is safety. “We walked during the night and slept in the daytime”, says a pregnant mother of three who walked 100 km in 5 days. “I was so afraid someone would attack us from the bushes”.

If everything goes well, flight promises refuge. Some distant light at the end of tunnel. That is why one in three Syrians is now on the run, either internally displaced within the Syrian borders or in a neighboring country, having left everything they once knew and loved.

There is no sign of the violence ceasing; on the contrary. And those bearing the brunt are ordinary people. The need is worst in the plagued country itself, where humanitarian access is greatly limited. Nonetheless, Save the Children has, since the onset of the crisis more than 900 days ago, reached hundreds of thousands in Syria, under extremely difficult conditions.

Save the Children has for months demanded unhindered humanitarian access, something we don’t currently have. Operating without limitations in Syria would mean that we could reach those most in need.

Syria has become the great tragedy of this century so far, says the head of the UN refugee agency, UNHCR, “with suffering and displacement unparalleled in recent history”. According to the UN, the fighting has been so intense that the number of refugees has risen tenfold in a single year.

When you know how enormous the needs are – how dire the situation of millions of people – it is difficult to get your head around the fact that the emergency response of an organisation like Save the Children, whose simple aim is to meet the basic needs of children and ensure they stay alive, is only 40% funded.

Outside Syria itself, Lebanon has the largest number of refugees – a change, as a few months ago, Jordan held that dubious distinction. One in ten inhabitants of Jordan are Syrian, one in five inhabitants of Lebanon. Most of the two million people that have sought refuge and safety in neighboring countries live in ramshackle homes or temporary shelters.

More than one million Syrian children have fled to a neighboring country. I’ve met Aya, aged seven, who said she would dance when there was shooting outside, “because I don’t like to be afraid”.

No one says it, during my interviews with the refugees, but many do realise that it could be months and years before they will be able to return to a country that was once called Syria. And those I talk to are in different stages of grieving for everything they have lost and left behind and might never see again. Family, home, a country. The conflict has unleashed an unimaginable tide of suffering, and continues to do so.

Our teams are on the ground inside Syria and in neighbouring countries getting vital aid to children.

But we need your support to reach more children: please donate now to our Syria Appeal