By Farah Sayegh, Save the Children, Jordan
“I was shy because the other children laughed at me,” Amira* tells me. She has an innocent smile and dark brown eyes but I can see the burn marks on the sides of her face and I notice some bald spots on her head. She is 10 years old, with a neat ponytail of golden hair.

Last year, Amira was severely injured by shrapnel that hit her whole body from a nearby explosion while she was attempting to escape the violence in her city with her family. Due to the dreadful state of Syrian hospitals and their limited medical supplies, Amira was not properly treated.

Za’atari camp has been Amira’s home for the past year. The burn marks on her little body and face were much more apparent when she arrived here. 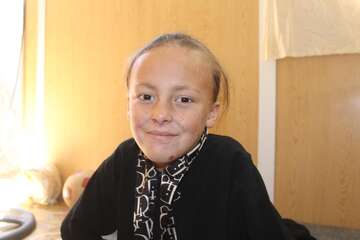 “She refused to leave the tent for any reason, and on the rare occasions that she did, she would come back crying to me because this child called her names, that child moved away from her and it broke my heart to see my daughter in this weak state,” Amira’s mother tells me. Tears fill her eyes and she hugs Amira, who sits in her lap continuously scratching the scars on her arms. Occasionally they bleed under her clothes.

For more than two years, children in Syria have endured appalling suffering. Hundreds have died in brutal attacks and many more, like Amira, have been severely injured and their wounds left untreated. These children have lost everything: homes and schools, toys and clothes, and in this case even their self confidence. No child deserves this.

Things are brighter for Amira now. For the last year, she has been going to one of Save the Children’s Child Friendly Spaces near her tent. She brightens when one of our field coordinators approaches,; she has been working closely with Amira since day one. Proudly, she tells me about Amira’s drastic improvement.

“She would stay in the corner of the room not wanting to speak or play. I noticed the disgusted looks on the children’s faces as they looked at her, so I got her a change of clothes before the start of activities to allow her mother to wash the bloodstained shirt and pants that were the only clothing she was able to bring from Syria,” the field coordinator told me. She made sure that Amira was participating in all psychosocial activities,  drawing and learning songs, and helping her build friendships with the other children.

A roll call of new friends

“Rawan, Nour, Aisha, Sarah, Yasmine…” Amira tells me her friends’ names. Her mother explains how glad she is that her daughter now happily leaves the tent to play and has been going to the mosque with her siblings. Amira has also insisted that her mother enroll her at the camp school.

After we say warm goodbyes, I leave Amira’s tent with mixed feelings. I admit I feelproud to belong to an organisation that has brought back normality back to Amira’s life and lifted the spirits of thousands of children like her. However, I also leave with deep guilt. The number of Syrian child refugees has just topped one million. There must be untold numbers of Amiras suffering inside Syria, their injuries untreated, desperately in need of the kind of help Amira has received here in Za’atari.