Helen Mould, Information and Communications Manager in South Sudan, met a mother who is learning new ways of growing food for her family.

Nyakor holds in her a hand a few small beige fruits. She is showing me what she will be feeding her children today.

“At the moment there is no food in this place.

“The harvest was in September last year and the maize has all been eaten, and the vegetables are not ready yet, so we go into the bush to collect these fruits to eat.” 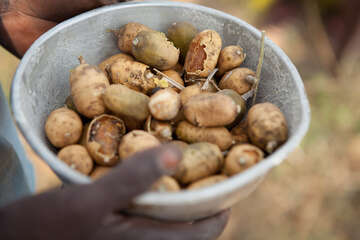 The fruits, which smell like dates but taste bitter, have little flesh on them and can cause diarrhoea in children. But between now and the rainy season in May, these will be the main source of food for Nyakor’s children and many others in Maiwut in Upper Nile state, South Sudan.

This part of South Sudan always experiences heavy rains between May and October but this year they were exceptionally bad, wiping out many of the crops that people like Nyakor had planted.

Nyakor’s youngest daughter, one-year-old Nyaluak, is already weak and three of her other children recently been ill as a result, she tells me, of a lack of food. 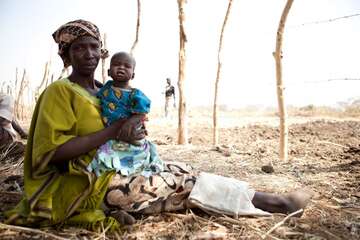 Nyakor shows me to her home, a small round tukul (traditional mud hut) where her children are gathered. Her oldest son, Sibit, takes me to a nearby tree where he stops to collect a small bowl full of the fruit for his younger brothers and sisters to eat.

“I don’t have any porridge so I try and give them some fruits which I boil,” Nyakor tells me.

“Three of my children are sick and suffering. They haven’t been well for the last three weeks; they have only been eating these bitter fruits and this has given them diarrhoea which has made them weak.”

In South Sudan nearly one third of children are malnourished and 14% are severely stunted as a result of lack of food.

The reasons for the food problems are complex including flooding, drought, poor infrastructure, conflict, and border closures with Sudan and the shut down of oil production that has caused food prices to rise.

Looking around Maiwut, the problem of growing food here is obvious. The dark soil is parched and the ravines where there used to be  streams are dry.

In Nyakor’s vegetable garden behind her home, the okra, tomato and cabbage plants she planted last year are now shriveling in the sun.

If I had been here just three months ago, the scene would have been very different. The place where I am sitting would have been a swamp and the village, like many others here would have been virtually cut off from the outside world as the dirt roads turned into rivers of thick, sticky mud.

In the market here and in other nearby villages the only vegetables I see for sale are small mounds of onions. But even they are far too expensive for most people, who are mainly pastoralists and make a small living by collecting and selling firewood or grass.

But the women here are determined to make a change.

On the outskirts of the village, under the searing sun, tens of women, young and old, are tirelessly preparing the soil for a new demonstration farm, where they will plant vegetables in readiness for the next rains.

This is the second plot they have prepared. The first yielded its first harvest of maize last year, which they used to feed their families, selling the remainder to raise a small amount of money to see them through this hard period.

As Nyakor tells me, most women here grow crops but with little agricultural knowledge or tools they were never able to harvest enough to support their families.

“Since I joined this project Save the Children has been showing me how to do things properly so I will be able to help my family.” 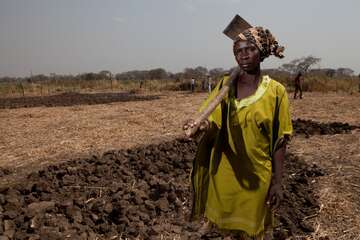 In Upper Nile, Save the Children is running a programme funded by the Dutch Consortium for Rehabilitation where women like Nyakor have been given seeds, tools and animals, as well as the knowledge to make sure their farms give them a good harvest this year, and in years to come.

When I ask Nyakor what she hopes to gain from this project, she tells me, “It is simple. When my vegetables grow I will sell them at market and then I will use the money to invest in my farm and to buy a goat. When I have a goat, I will use the milk to feed my children.”