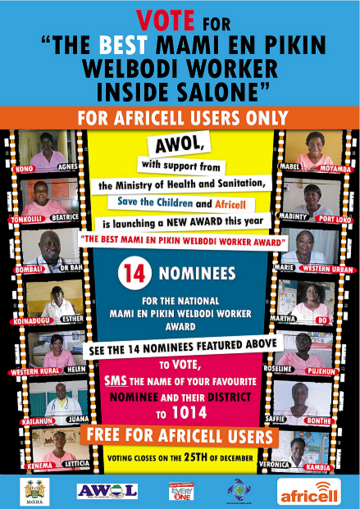 of my series of blogs for World Health Worker Week, I am writing about an amazing woman who wan a national award in Sierra Leone.

Last year, Save the Children in Sierra Leone launched the ‘Mami en Pikin Welbodi Worker Award’ to build the profile of health workers and encourage the public to value and recognise the important work that they do.

Health workers were nominated from each district of Sierra Leone and put to the public vote.

And the winner is…

The winner was announced in December.

She was Saffie Lusine, a Maternal and Child Health Aide from Bonthe District, one of the most remote districts with some of the poorest health indicators.

Saffie was given the award for her 28 years of service, including eight years as a health volunteer in rural and hard-to-reach communities.

She has often invested her own resources and made long journeys to communities far from a road to ensure that people got the medical help they needed.

Saffie single-handedly started running a small clinic in the district, furnishing it with beds, tables and chairs. She then donated it to her community as their first health clinic.

She later advocated for additional resources to expand the clinic into the Matru Jong Community Health Centre, which now boasts a labour room, a consultation room, a weighing section and an antenatal care section and drug store.

As part of her award, Saffie soon saw  her face posted on a big billboard in her home district in the southern part of the country.

We hope that many more health workers will be inspired by Saffie’s exemplary service and strive to achieve what she has.