A recent statement from the UK government marks an important step in our campaign for more health workers in the world’s poorest countries.

But with just days to go until a pivotal global health conference, it’s vital the government’s warm words are translated into firm commitments. 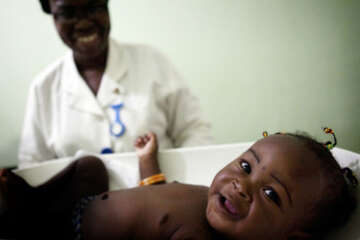 The statement from Development Minister Lynne Featherstone came just days ahead of a key global meeting on the desperate shortage of health workers in poor countries. Next week, governments from around the world are due to meet and make plans to tackle the crisis.

“The UK is supporting, and will continue to support, this global effort to tackle the health workforce crisis,” she said. “We will continue to work with developing countries to support them in their efforts to build health service quality and access. Health workers are the key stone in achieving the goal of universal health coverage.”

The Third Global Forum on Human Resources for Health – which begins next week – is quite simply the best chance we have for all countries to get together to address the global shortage of health workers.

Governments and other development partners are being invited to announce ambitious commitments at the forum to build the health workforces needed to achieve universal health coverage – and save children’s lives.

The forum has the potential to mark a turning point in the health worker crisis – and in efforts to reduce child mortality.

That’s why we’re calling on the UK Department for International Development (DFID) to seize this opportunity. We’re asking DFID to use the forum to demonstrate exactly how the UK will help the poorest countries to train and support enough skilled health workers.

With that in mind, last week we co-hosted a roundtable event to look at the UK’s potential contribution to tackling the health worker crisis.

Around 40 experts attended from NGOs, academia, professional associations, diaspora groups and the private sector.  Together we agreed eight recommendations on how the UK government and British-based organisations can make a greater contribution to closing the health worker gap in the poorest countries.

We presented our recommendations to Lynne Featherstone later that day. Her statement of support followed immediately afterwards.

However, while she confirmed that the UK will be making a commitment on tackling the health worker crisis at the Third Global Forum, she said the exact details are still to be finalised.

That’s why we’re asking supporters of our health worker campaign to take action.

With just a few days left until the Global Forum starts, it’s vital we call on DFID to make sure their commitment is suitably ambitious.

Add your voice to our campaign to tackle the health worker crisis – and help save children’s lives.