Rebecca Kirk is 14 years old. Her family have been involved with a Save the Children project to improve the quality of education in 13 primary schools in Manica province, Mozambique. She first visited the project in 2011; this blog is from her recent second visit.

Spending two days in Chimoio, Mozambique, I was struck by how the country was developing and changing. The civil war that raged for 16 years is two decades past now, but its legacy means many children lack basic rights like access to childcare, healthcare, and education.

So much about Mozambique was clashingly different to the UK, but I had expected this. What struck me most were the familiar details within lives so different to my own.

A shoeless man with sugar cane piled high on a bike he was pushing to market, speaking into a white iPhone.

Schoolchildren playing hopscotch in the dirt with rocks, just as I used to in the playground with beanie bags.

The delight young children took in popping bubbles I blew with my sister, and the unspoken connection I made with a girl my age – we were too old for bubbles and couldn’t care less!

A recent No.1 by Will.i.am and Britney playing in a bar opposite the cafe where we ate local fish and cassava.

There were many signs of progress in Manica province, but travelling further into rural landscapes, families and living areas became poorer and poorer.

A boy held a dead rabbit up to the window of the jeep, his younger siblings looking on. I saw fewer people with shoes, more with huge round stomachs from malnutrition. The school we visited, Monte Chimoio, was tiny and so basic: uneven logs for seats, three small classrooms made of sticks and branches – and no textbooks. 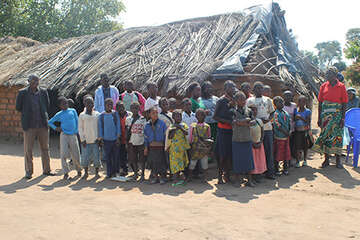 But here, in the least advanced areas, was where I had the deepest impression of the importance of Save the Children, where the children sang the loudest when we arrived. As people saw our jeeps with logos rattling past, they smiled and waved. Shouting children chased the cars wearing Save the Children schoolbags and shirts: the organisation is known and loved by the communities here.

A better chance in life

By training teachers in everything from mathematics to physical skills like carpentry, and teaching children survival skills that will keep them clean and healthy, Save the Children gives those young people better chances in life. The education project we have been supporting for the past three years is also working with school and community leaders and councils to give children a voice – something every child, in every part of the world, should have.

This was my second time in Mozambique, and only the second time I had visited such a poor country. It was fascinating but shocking for me to see the way people live and the trip forced me to think about the materialism of so many, myself included, in European society.

I felt a lot more involved this time, and I would really like to visit again and see more of the progress that Save the Children is making.