Mali: It’s really hard to hear what these women have been through

On the last day of a field visit to Mali, I spent an afternoon in Mopti, in a local community who is hosting displaced people.

The men left the village so we could speak privately with the women about subjects that are taboo and difficult to talk about.

The women told us stories of children being abducted and raped, in some cases by numerous armed men, and for days on end.

It’s really hard to hear what these women have been through.

One woman told a horrific story of her neighbour, who was raped in her own home.

“She was sleeping in her room, next to her husband. The rebels came in, opened the mosquito net, and put a gun to her husband’s head. They did what they wanted and her husband couldn’t do anything. She had children at home too.” 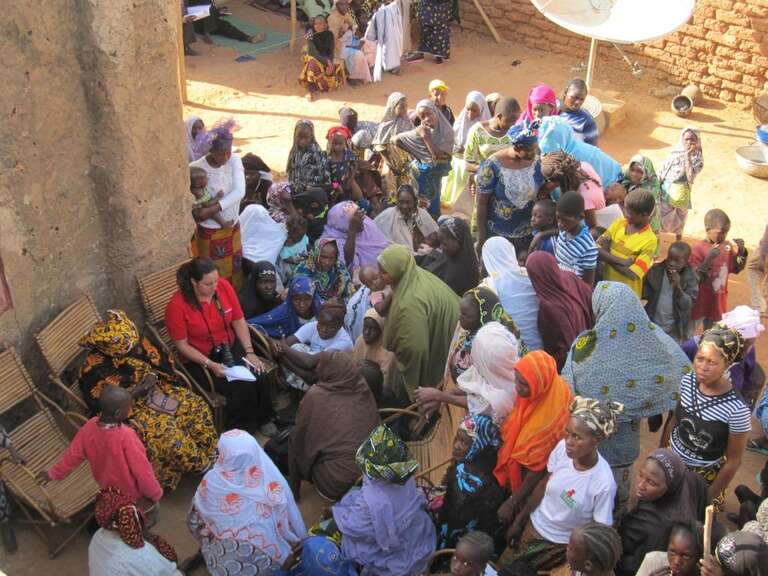 My colleague Annie and I met with local women

A shortage of food – and tourists

People who have fled the north are not the only ones facing difficulties.

An ongoing food crisis means that at least two million people across the country don’t have enough  to eat – 1.2 million of whom are in the country’s northern regions.

The conflict and instability have also brought the country’s tourist industry to a halt.

A young boy from Mopti sits with us and interprets while we speak to a young woman. After we finish, he tells us that he used to make a living selling local artisan goods to tourists.

“People from all over the world used to visit Mopti but now no one comes, and I haven’t been able to work in a long time,” he says.

When we arrive at the airport to leave Mopti, the security measures are very strict.  We get dropped off on the one kilometre security perimeter around the airport, where  our car and bags are searched.

We say farewell to our colleagues from Mopti and then get picked up on the other side of the checkpoint.

Our new driver apologises for the inconvenience but says, “after everything that has happened here in Mali, we can’t afford to take any chances.”

As we drive towards the tarmac and prepare to take off, I think about how many people in Mali are a long way from home, and a long way off from returning to the life they knew before the conflict.