India: Dancing up a protest against hunger

India’s Prime Minister has often called malnutrition a ‘national shame’. Yet nearly half of India’s children continue to be malnourished.

India’s economic growth is phenomenal. Its future is bright. So why is the nation of abundance failing its children?

Many Indians are demanding an answer to this question – not least, children themselves. Last Friday,during  a Global Day of Action in New Delhi in support of ending hunger and malnutrition, those children didn’t just shout about it: they danced, froze, toted fruit and placards, and banged plates and spoons.

Ordinary childish behaviour was coordinated into a protest at the catastrophe that affects the youngest generation in poorer countries all over the world.

Dance, freeze and make some noise 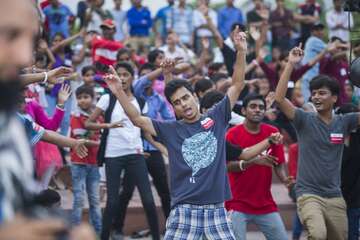 The Flash Tide in Central Park began with a Flashmob Dance:  children broke into a dance sequence to garner attention. Then came a Fl

ash Freeze, with nutritious fruit and placardsborne aloft, followed by Flash Noise: banging plates and spoons to protest hunger and malnutrition due to unavailability of food.
Popular Indian band joined in: Parikrama added a particularly interesting vibe to the evening, which ended with children swaying to the rhythm of the national anthem – an unparalleled, overwhelming moment.

Anthems are all very well – but these children make you wonder. Can we really feel national pride when millions in this country continue to live beneath the poverty line?

Salute the power of children

Twelve-year-old Himanshu opened the evening with his welcome speech, amazing the audience with his confidence. He ended with an inspiring call for solidarity: ‘Come, let’s join hands to kick malnutrition out of India.’

Up next was 16-year-old Shiv, who lives in a shelter home run by the Salam Balak Trust, an NGO. Years ago, Shiv ran away from home and landed in Delhi. By doing so, he escaped the strife and struggle back home but it was out of the frying pan, into the fire: he suffered through many nights without food in Delhi until he was found by the Salam Balak Trust. There, he got a new lease of life; there is no looking back for him.

Shiv’s is a story of hope but he was also lucky. So many children are not.

End hunger and malnutrition in this generation

Malnutrition affects millions of children around the world. It kills them; it leaves them stunted, unable to fulfil their potential; it marks their futures and so those of their own children and of the countries they live in – precisely the ones that most need the brains and strength of their young people if they are ever to achieve economic parity with the richer nations.

Just like a child, a nation can’t grow big and strong without the proper nourishment, and in a country’s case, that nourishment is healthy children. This is an emergency, no less, and countries must deal with it accordingly. Tackling child hunger and malnutrition must be the yardstick by which governments and nations are judged.