IF: Thoughts on the Campaign as the Dust Settles

As the dust settles on the G8 and the IF campaign starts to wind down it’s time to start thinking about what went well and what we could have improved. As the IF campaign, we’re going to do a full evaluation but here are some personal reflections. I wanted to capture and share before the adrenalin leaves and the post campaign amnesia/hangover sets in. I’d love to hear where you agree/disagree and what I’ve missed. 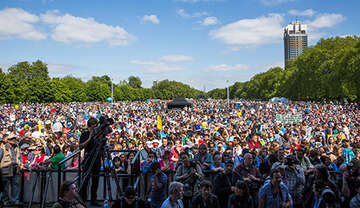 Before I get into the detail, I’m incredibly pleased we collectively embarked on this journey and ran this campaign. While there are many, many things we can improve in the future, the campaign shifted the needle and resulted in some impressive outcomes from tax to nutrition to rebuilding our movement that simply wouldn’t have happened without it.

I feel privileged to have been involved and to have worked with some incredibly talented and passionate people.

Looking back on the measures of success we set out at the start of the campaign, we outperformed almost all of them. The progress we got on tax in particular, while not everything we wished for, was many times what we thought possible when we started working together.

You make things happen by making things, that’s Richard Curtis’s mantra and it’s right. We took a risk to campaign in difficult times and it paid off. It seems obvious now that in a UK G8 year civil society should work together, but two years ago when the idea was first discussed it was far from clear.

In fact, lots of people were keen to stick to their own issues and identity.In my view, IF shows once again why the development sector is probably the most effective sector in UK civil society. When there’s an opportunity for impact it can unite and raise its game in a way that few others can.

One of the biggest impacts of the campaign was in setting the agenda. Before the campaign had even properly launched, the fact of its coming had influenced the political agenda. The campaign was critical to ensuring that the UK government, as host of the G8, focused on tax dodging and hosted their nutrition summit.

One of the most entertaining critiques of the campaign was that IF told the government that we had a campaign planned, as if that was some sort of collusion. We did tell them that it’s called lobbying, and it’s one of the most important things we did.

Despite my reservations that we were spreading ourselves too thinly, the ultimate issues mix of nutrition, land and tax just about held together. Some of the other issues such as climate financing, agriculture and general transparency fell by the roadside due to an absence of political strategy behind them but overall, I think it worked. Tax in particular connected with the zeitgeist and Christian Aid deserve special credit for keeping it in when others (me included) questioned how we’d connect it to hunger.

This was the biggest risk of the campaign and it worked. Both Hyde Park, which drew in 45,000 people, and Belfast, where thousands also gathered, were powerful events with an incredible atmosphere. The installation and the rally meant that they cut through in the media and connected with people in a different way. We should keep thinking about different methods of mobilising people and we should keep doing it. The faith groups in particular can still deliver numbers.

Over 200 organisations, all the main development groups and lots of broader civil-society groups came together under the same banner. This itself is a huge achievement and brought together the contrasting strengths of different groups. The few organisations from the sector that didn’t join chose not to do so because their political strategy was totally different to the campaign’s.

That should be recognised and respected (although their reliance on slagging off others in civil society as their way of getting media profile is much less admirable). Their decision not to engage led to a much more collegiate and constructive atmosphere on the Organising Committee at negligible cost.

However, not having the unions on board was a real disadvantage, although given the domestic situation, I can’t conceive of a way that they would have engaged unless domestic austerity were the centrepiece of the campaign.

Only one organisation integral to our movement decided to do their own thing despite being part of the campaign. This was disruptive and actively undermined the collective effort and impact. Some of our best creative resources were underutilised as a result. I personally found it hugely disappointing and a disservice to the movement.

Despite some rocky times and different views, the group held together, managed the tensions and reached agreement when it needed to. Everyone involved made trade-offs and compromises, no one was intransigent. Most groups took up each other’s issues, even if they hadn’t been traditional areas of focus. We all realised that it was critical to protect our collective endeavour. In an era of fierce competition and tight budgets, this is hugely impressive. And it bodes well for future collaboration.

The IF campaign was a proper campaign, incorporating posters in churches and adverts in newspapers, a wide range of actors including celeb and grassroots support, a unified set of asks, and an opportunity for the public to engage nationally and locally, both on- and offline.

In an era dominated by online campaigning groups coming along at the last moment to herald a victory they have barely been involved in, it was refreshing to be part of something that really mattered and that created pressure which led to an actual result. In particular, it’s awesome to see how powerful a coalition can be with government targets: it gives them nowhere to hide.

One of the biggest impacts has been building for the future. We’ve helped motivate a new generation of activists, reignited our existing supporters and skilled up a new generation of campaigners by helping them learn from each other. Certainly, our staff learnt a huge amount by doing and that capacity will be there for the movement for the long term. The campaign didn’t end in recriminations; it ended with us feeling like we did the right thing and we’ll do it again.

In the early days of the coalition we agreed that we’d work in a ‘loose-tight’ framework – that is, basing our work around three big moments. This was agreed as a way of trying to avoid tying ourselves too tightly together and enabling other activity to go on in this period. While it worked in getting everyone involved, it hampered campaigning. We lost too much momentum between moments and in future we should be more ready to work even more closely in defined periods.

The lack of major collective campaigning in recent years has I think reduced capacity within the sector and the ability to think and deliver big. IF has helped to reverse this but the campaign was at least initially driven by a small group of individuals and we missed the capacity we relied on in the past. At times, there could be an inverse relationship between organisations’ willingness to comment on strategy and their ability to actually deliver on it. Again, I think this changed through the campaign.

Starting with a new identity makes a lot of sense to give impetus and energy but needs huge early exposure to get established. We ended up with large-scale media coverage of the campaign but this came too late. To have made it happen earlier would have needed significant brand advertising or large-scale celebrity engagement. Taking on the issue of tax made the latter very hard to secure as celebs fear personal exposure, even when unwarranted.

We started slowly and went down several blind alleys. A few organisations significantly shifted their positions, making it harder to reach agreement. We needed more senior engagement early on that would have helped shortcut some of this. This meant very tight timelines for the rest of the campaign, which made things harder – especially for the faith organisations, who tend to need longer timelines.

Those are my headline reflections. I’m hoping more reflective thoughts will come to me as the immediate fog of the campaign clears.

Finally, my personal thanks again to everyone who helped make IF possible. In my view, despite any caveats we have made our movement stronger and more likely to work together again and have helped change the world a bit for the better.