They were nurse Watta Borbor, midwife Rommina Yah,  and Dr Sola, a doctor and Head of Health for Save the Children Liberia.

Their visit was part of an  exchange we are running. We had previously sent a group of UK health workers to Liberia so they could see firsthand the challenges of working in a poor country destroyed by war.

(You can watch the video of what the UK health workers saw here: http://www.youtube.com/watch?v=WrrlNMdQV2c)

Almost on arrival, Dr Sola was  pulled onto Sky TV to talk about the fight against HIV.

The footage was used every hour from 5pm to 11pm on Sky News and appeared on the Jeff Randall show that evening.

Already a supporter of the aid commitment, Tony Cunningham has promised to ask questions and work to make sure Liberia’s aid isn’t cut.

We also held a branch meeting in Putney, recruiting new supporters in the Secretary of State for International Development Justine Greening’s constituency.

Wednesday was full of activity. We started by going to the John Radcliffe Hospital in Oxford. This is the workplace of one of our health worker campaigners, nurse Charlie McCulloch, who went to Liberia.

Initially, Watta was ecstatic to see fully stocked cupboards, children’s play areas and nice beds. When she heard that a nurse at Radcliffe only cares for five patients each day, compared to the 50 she sees each day, she realised how stark the difference was.

This visit was covered on BBC TV and BBC Radio Oxfordshire and in the Oxford Mail and the New Internationalist.

In the evening, we gave a talk in Witney, which recruited a number of new supporters in the Prime Minister’s constituency. 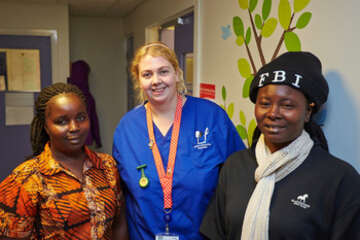 Finally we took our health workers to meet others in the community.  We were hosted by the Royal College of Nursing and had a great in-depth discussion and talked about how we can work more closely together on issues of joint interest.

Then we went to the House of Lords, where Baroness Glenys Kinnock of Holyhead met us. She was absolutely wonderful and promised to help us hold DfID to account in keeping up aid to Liberia.

It was an amazing visit – allowing our health workers in Liberia to see how many people in the UK care about their work and want to learn more.

We will continue to campaign with our health workers, with a group from India set to visit in the autumn.