This blog post was written by Tim Linehan, Campaigns Adviser

It’s taken 43 years. Longer if you include the first time that campaigners called for rich countries to donate a percentage of income to international aid.

But on 20 March, after years of campaigning it happened. George Osborne announced that this year the UK will spend 0.7% of national income on aid. 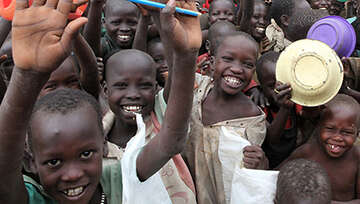 The last few weeks have been the icing on the cake. Just as the government’s commitment appeared to wobble under sustained pressure by the anti-aid lobby, our hard work paid off.

The alliances we built with all three parties gave us a bedrock of support. We targeted backbench MPs creating a formidable group of advocates. Tactical political nous and the sheer volume of public support generated by Save the Children and the IF campaign helped keep the government on track.

The numbers speak for themselves. 40,000 people have emailed their MP in support of the IF campaign. More 200 meetings have been held with supporters and their MPs. Incredibly, over 400,000 people have watched our film ‘What Has Aid Ever Done For Us?’

Twenty eight CEOs of some of the UK’s leading companies signed a letter in support of aid in the Financial Times. Liberian Health workers came over to speak at events in Witney and Putney, the constituencies of the Prime Minister and Justine Greening, international development secretary. And on Tuesday 500 George Osbornes gathered in Parliament Square in a stunt reported by TV and newspapers across Britain.

So there you have it – all the ingredients needed for a successful campaign: support from the broader population; raising the bar by attracting new audiences with a cheeky film; sophisticated political and evidence-based policy work; fantastic supporter actions and a stunt generating huge media interest.

Everyone connected with this campaign should all be very proud of the role that they played in making this happen. It just goes to show that when we work together our campaigns can deliver spectacular results and can transform the lives of people around the world. Thank you to all our amazing Save the Children supporters. We did it!