Driving down the dusty, potholed roads of Mbuji Mayi in the Democratic Republic of Congo (DRC), it’s hard to believe it is a key artery in the global diamond trade.

Some of the world’s largest diamonds have been found here, and the local economy thrives on the sale of diamonds – both legal and illegal.

Local traders pay a measly 1% tax on a diamond in Mbuji Mayi and a 3% tax once it is sent to Kinshasa – after which it gets into the global process of polishing, reselling, designing and sale at high prices for cosmetic and industrial purposes.

The highest profits are made far away from Mbuji Mayi by non-Congolese nationals. 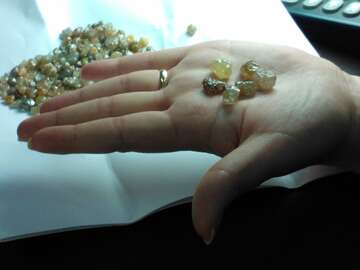 My colleagues and I visited a diamond trader’s shop in Mbuji Mayi. The wall of the compound was covered in colourful paintings depicting various stages of diamond mining – all featuring children.

There was a throng of children outside the compound and we were told that this was because it was a Friday – the day when the owner distributes money to street children, especially orphans. He also gives money to the local community for funerals, communal celebrations and marriages.

“I am generous to them and they are generous in return,” he told us. The more generous he is, the higher the chance that children and the community will choose to sell their diamond finds to him. At a time when many traders are closing shop, his business is thriving.

The day’s purchase was proudly displayed to us. We were told it could be valued at between $20,000 and $30,000 after polishing – this from a diamond industry supposedly in decline.

Most of these stones would have been bought dirt cheap from children, or as payment against loans and gifts given to adults.

The diamond trade is as sordid and ugly as this. Buying diamonds at low prices from local people allows traders to become very wealthy and influential.

Diamond traders with shops as small as the one we visited have been known to spend $20,000 on a single bar bill in Kinshasa.

Despite such garish exhibitions of affluence, Mbuji Mayi remains a desperately poor provincial capital which has benefited little from the lucrative diamond trade.

Health indicators in the province of Kasai Oriental remain among the worst in the country. Lack of funding means that health services are limited and poorly managed, with severe staff shortages. Communities know little about health, and communicable diseases and acute malnutrition are common, while fees mean that health is out of reach of poor families.

Children are the most vulnerable. In 2012, there were 4070 cases of measles and 101 related deaths among under-fives in Kasai Orientale.

We have also strengthened the disease surveillance system – so far in 2013 there has only been one case of measles, and early detection curtailed the spread.

Save the Children has supported health centres in the Makota and Mwene-Ditu health zones of Kasai Orientale with small grants of $250 to discourage consultation fees for pregnant women, under-fives and highly malnourished children.

This small intervention has shown how user fee removal enables access to services and encourages poor women and children to use health centre facilities– the first step towards universal health coverage.

The challenge is to push the government of DRC and Kasai Orientale to regulate the diamond trade more effectively and use local revenues to support and strengthen the health system. Child labour, which is currently such a fundamental part of the local diamond industry, must be totally abolished.

This can only be possible if the industry is better regulated and if revenues are used to give children better opportunities and skills for a brighter future.