Baby Umi: a heartbreaking reminder of why we must win the fight against hunger

Two years ago, in the midst of the worst drought to hit Kenya in decades, I met a little girl called Umi. She was very ill: malnourished, dehydrated, and close to death. She had been spotted by one of our mobile health clinics and rushed to hospital. The struggle of this tiny, frail baby, just three months old and clinging to life by a thread, moved me to tears.

In the most dramatic humanitarian crises, sometimes a single story tells us everything we need to know. Umi’s was one of those stories. Pictures of her as she fought to survive were beamed around the world and prompted an outpouring of generosity that raised millions of pounds and saved thousands of lives.

The BBC sent a crew to her village to interview her parents. Andrew Mitchell, then the international development secretary, visited her with me in a small hospital. As the scale of the crisis became apparent, the story of her survival took on a deeper significance, a prick of hope amid the despair. 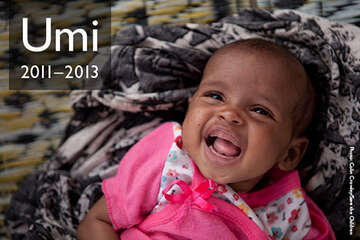 A symbol of recovery

As East Africa began its slow recovery, she began her own, putting on weight and gaining strength with every passing day. By Christmas 2011, pictures of her transformation appeared on the front of newspapers. The BBC ran a follow-up story on her recovery. Having been the embodiment of the crisis at its worst, as the situation improved, little Umi, still less than a year old, became a symbol of regional recovery and the wider progress being made to reduce child deaths in the world.

On Tuesday this week, Umi’s story ended. She died in hospital from pneumonia and diarrhoea – the two biggest killers of children in the world.  In the end, after all she had been through, she was not the victim of a humanitarian disaster. The crops in her village had not failed and the herd of goats owned by her father had not starved, wiping out his income. Umi died because she’d been weakened by that initial bout of hunger, and because she lived miles from nearest hospital. She arrived there too late. She died because her family were poor.

Kenya is one of the Africa’s most prosperous nations, a place of bustling ports, fertile land and international tourism. In many ways, it is one of the continent’s success stories. When I was there last month, visiting the remote North Eastern Province, it didn’t feel like it. The villages that dot the harsh landscape of this remote corner of Africa are not connected by roads.

In the tumbledown hospitals and clinics, staff are stretched to breaking point. I met mothers whose children had died from easily treatable illnesses because they didn’t have access to the basic healthcare that would have saved their lives.

In the town of Wajir, the region’s main hospital has just closed its maternity ward, and the stabilisation centre, where the most dangerously ill children are treated is kept afloat, just, by funding from the Kenyan government and Save the Children.

Meanwhile health-workers supported by Save the Children run clinics on a shoestring in remote villages, administering vaccinations under trees. The lack of drugs and manpower means that children die of the most innocuous diseases. In the hospital where Umi fought and lost her final battle, a single nurse was tending two wards.

Africa may be rising, but its ascent is far from even. Inequality and marginalisation mean that, while the continent is home to six of the world’s ten fastest growing economies, every year more than three million of its children will, like Umi, die preventable deaths. Those who argue that aid is not necessary and economic growth alone will protect these children from death and disease should pay a visit to northern Kenya, where even in a good year, thousands of children will die of illnesses we know how to treat, despite their country’s development.

No child born to die of hunger

There is a bitter irony in the fact that Umi’s death came days after the world agreed an action plan to battle hunger and malnutrition that will save the lives of 1.7 million children over the next six years. A bout of extreme malnutrition in early childhood can leave children weak for the rest of their lives: six weeks before her death, we had received confirmation that Umi had been stunted by her experience of hunger as a baby, two years ago. Ultimately, it meant she was less able to fight that final, fatal illness.

Umi was a little girl whose life and death were unwittingly bound up with some of the world’s biggest problems. She never understood it, but her survival against the odds sent a message of hope in darkest of times. Her death is a tragedy, but it will drive us on, renewing our resolve to help children living in the world’s toughest places share in the dramatic progress we are making in fighting child mortality. Within our lifetimes, we could stop any child, anywhere, dying as Umi did this week. That would be the only fitting tribute to her extraordinary, but tragically short, life.